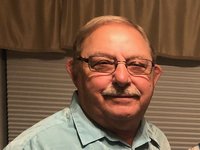 Sodus: Age 75, passed away at home on February 24, 2021. Gordon was born in Cooperstown, NY on January 1st, 1946 to George and Alma (Lincourt) Wilfeard. He graduated from Rush-Henrietta in 1965 and joined the Navy in 1966. Gordon served 2 tours in Vietnam on river patrol boats. After an honorable discharge he started working at Xerox in Webster where he worked for 30+ years. In 1970 he married Nancy and together they had 2 daughters, Tara and Tina. Gordon attended Cayuga Community College Police Academy from 1988 to 1989. After graduation he served as a Wayne County Sheriff Reserve Deputy for 23 years. Gordon was a member of the Williamson American Legion Post #394, Charter Member of Post #394 Legion Riders. He enjoyed riding horses, playing golf, riding his motorcycle, bee keeping and most of all his family.

Friends and family are invited to call 1:00pm-3:00pm Sunday, March 7th at the Norton Funeral Home, 45 W. Main St., Sodus, NY 14551. Where services will start promptly at 3:00pm. Interment with Full Military Honors at Lakeview Cemetery, Pultneyville in the Spring. In lieu of flowers, contributions may be made in his memory to: Williamson American Legion Riders – Food Box Program, PO Box 618, Williamson, NY 14589. Condolences may be expressed at www.HSNORTON.com