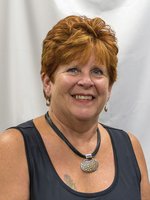 Penny S. Vanderlinde passed away on June 3, 2021 at 62 surrounded by her family. Born in Sodus, NY on April 5, 1959, to Bessie (Shields) and Larry Johnson, she was the fourth of five children. Penny is predeceased by both of her parents, brothers Michael, Larry (Bonnie), and Lee; her mother-in-law, Irene, and father-in-law, Toby; as well as her husband and love of her life, Thomas Vanderlinde. Penny is survived by her sister Charlee (Roy) Henderson; her three children Derik (Lindsey) Williamson, Travis Williamson, and April (Nick) Domster; her five beautiful grandchildren Landon, Mackenzie, Colin, Brooklyn, and Liliana; as well as countless extended family members and friends. Penny loved her family more than life itself, and would do anything for them, especially her grandchildren.

Penny’s passion for baking resulted in her owning Penelope’s Bakery and, eventually, Penelope’s Café, in Lyons, NY. Penny later began working at Midlakes Education Center as a teacher’s aide, and as a Realtor for Nothnagle and then Cornerstone. Penny is known for her sass, strength, supportive nature, and the way she said “good morning” to everyone she passed. She will also be remembered for her love for riding her Harley-Davidson. She will be greatly missed by so many of the lives she touched.

An outdoor Celebration of Life will be held on Sunday, June 13 at Perkins Park, Pavilion #1 in Newark, NY. Family only from noon-1pm, with friends and family welcome from 1-4pm. A service by Pastor Cynthia will be presented at 2pm. In lieu of flowers, please consider donating to the Lyons Community Food Pantry at 11 Queen St, Lyons.