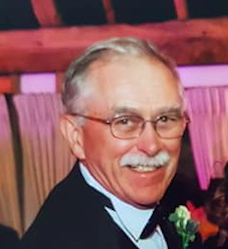 A lifetime resident of Sodus, he graduated from Sodus Central School, Northwood Academy and the Agriculture School at Cornell University.

After college, John worked with his father Morton to raise and train champion harness horses, which he took on the racing circuit around the eastern US with his wife, Martha. Home on Killarney Farm he was devoted to raising his children and supporting their activities. His farm included sheep, pigs, beef cattle and hay for sale and he continued to work with Cornell on safe farming practices. In recent years, he focused his hay sales on Amish and Mennonite auctions where he was known by many.

Throughout his life, the New York State Fair had his complete focus throughout the calendar year. He spent winters dreaming up new classes to enter, preparing his seed orders on cold nights thinking of warmer spring days. His support of the horticulture and vegetable shows was endless, and so were his accolades; his prized entries were regularly featured in the Court of Honour, or donned with grand champion rosettes.

He never stopped exploring, questioning, discovering, and learning—whether on his farm or his many journeys. His farming included early summers in Colorado herding cattle, which led to a lifelong fascination with the old west and cowboys—and culminated in recent winters spent in Silver City, New Mexico & northern Mexico, where he studied & and practiced studio ceramics and weaving with a group of artisans and friends with whom he hiked and traveled.

His travels took him all over the United States, including many trips to New York City to visit his son, John. He built a winter house in a rural village in Mexico,  he ventured to Australia and New Zealand, and to England when his daughter Courtney moved there. He loved hiking the Grand Canyon, visiting old friends in Colorado, seeking out ceramicists whom he admired, and just being able to sit down for conversations with new friends along the way, always asking if he could help, feeling privileged because, as he used to say, “not everyone gets to do this.”

John was always ready for new adventures while staying devoted to his friends and family, meeting regularly for coffee with a group at the Corner Store in Alton, always making the difference in people’s lives.

John passed away suddenly on November 4th, 2019 at the age of 77. He is survived by his wife, Martha Dirksen; son, John; daughter, Courtney; three adoring grandchildren, Finn, Arlo and Ridley; and a host of other relatives and friends.

To send flowers to the family or plant a tree in memory of John Adams, please visit Tribute Store
Monday
9
December