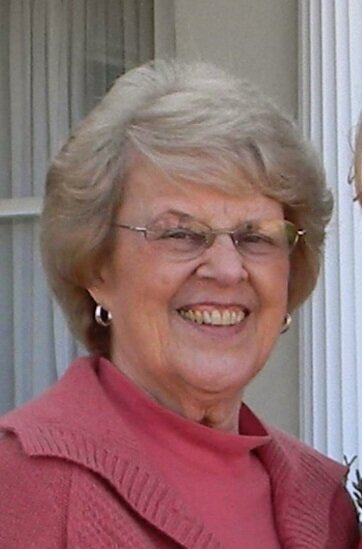 Please share a memory of Esther to include in a keepsake book for family and friends.
View Tribute Book

Esther & Charles met at the Sodus Point Roller Skating Rink in the Fall of 1953. From that “Point” on they were always together.  Married on July 7, 1956 and in 1959 started their family.  Four boys would soon keep her beyond busy.  Raising her sons in Sodus Pt. amongst relatives and friends, specifically the good old Fitzhugh & Bay St. kids was never dull.  She was a very good cook & baker, as all enjoyed her scrumptious snacks and meals.  Knitting and sewing were a few of her pastimes.

Once her children all entered school, Esther became employed at the Marine Midland Bank in Sodus as a Bank Teller.  After a few years there, she joined the ranks as a Claims Examiner at the NYS Labor Department in Sodus (office relocated to Newark) from where she would retire in 1999.

When it came to shopping, few were her equal.  Trips to the New England area searching for antiques, while staying at her brother Steve’s home.  Crossing the border into Canada to spend time and shop with her beloved sister Ruthie.  Perusing these shops for those thoughtful gifts for future occasions.

Later on in life she became a pretty good hand aboard their sailboat “Spectra III”.  Enjoying many a great daysail in and around Sodus Bay, coupled with lengthy excursions to the Canadian shores with family and friends. She will be remembered for her beautiful smile and thoughtfulness.

Esther’s family is thankful for the comfort and care she received while at the Brookdale Senior Living Assisted Memory Care Home located in Pittsford, NY.

Friends and family are invited to her “Celebration of Life” at 11:00am on Saturday April 23, 2022 at the Alton Gospel Tabernacle  (Rt. 14 Alton, NY).  Interment to immediately follow at the Rose Cemetery (Rt. 414  N. Rose, NY). Please then join her family from 1:00pm- 4:00pm at the Wallington Fire Hall (7863 Ridge Rd. Wallington) for reflections, food and refreshments.

In lieu of flowers, please make a donation in her memory to Dementia/Alzheimer's Research  at Donate Now, or at act.alz.org/donate. Condolences may be expressed at www.HSNORTON.com.

To send flowers to the family or plant a tree in memory of Esther Catchpole, please visit Tribute Store
Saturday
23
April

Share Your Memory of
Esther
Upload Your Memory View All Memories
Be the first to upload a memory!
Share A Memory
Send Flowers
Plant a Tree