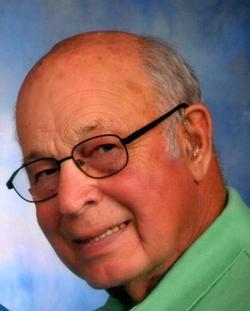 <p>Savannah:&nbsp; Donald G. Colvin, age 87, of Savannah passed away peacefully Friday (April 25) at the Wayne County Nursing Home with his wife of 65 years and his family at his side.&nbsp;</p> <p>The family will receive friends on Tuesday, April 29, 2014 from 2 to 4 PM and 7 to 9 PM at the Norton Funeral Home, 13081 West Church Street, Savannah.&nbsp; The funeral service will be held Wednesday, April 30, 2014 at 2 PM at the Savannah Community Church, 13368 Seneca Street, followed by interment with Military Honors at the Butler-Savannah Cemetery on Route 89.&nbsp; &nbsp;Kindly consider a donation in Don&rsquo;s memory to the Wayne County Action Program, Inc., 159 Montezuma Street, Lyons, NY 14489.</p> <p>Don was born on January 18, 1927 in Butler, NY, the son of George and Marjorie Colvin.&nbsp; He attended first grade at a one room schoolhouse in South Butler.&nbsp; Don graduated from Leavenworth Academy in 1944 and he began farming right out of high school.&nbsp; He worked as a farmer until 1949, when he married Lynn Seaman.&nbsp; He entered the Simmons School of Embalming that same year.&nbsp; From 1950 to 1951, while employed at Taylor Instruments in Rochester, Don also served as an apprentice at the Charles Younglove Funeral Home.&nbsp; Don received his draft notice two days after receiving his funeral director&rsquo;s license.&nbsp; He joined the Army on January 6, 1952, and entered basic training at Fort Lee, VA.&nbsp; In June of 1952, Don left for Korea as a member of the 293<sup>rd</sup> Quartermaster Graves Registration Unit.&nbsp; Don was honorably discharged in 1953 and returned to work at Taylor Instruments.&nbsp; In June of 1957, he and Lynn purchased the Stevenson Funeral Home in Savannah.&nbsp; In January of 1960, Don took office as the Supervisor of the Town of Savannah.&nbsp; He held the office of Town Supervisor for 48 years, the longest serving consecutively elected official in New York State.&nbsp; In 1966 in a unanimous and bipartisan vote, Don was elected Chairman of the Wayne County Board of Supervisors.&nbsp; Recognizing that attention from Washington could translate to assistance for the County, Don invited Senator Robert Kennedy and Congressman Frank Horton to visit Wayne County and they accepted that invitation.&nbsp; Ever the visionary, Don put into practice projects in the 60&rsquo;s and 70&rsquo;s that would be considered innovative today.&nbsp; Long before it was fashionable Don centralized the County Highway Department, instituted a capital plan for paving and maintenance of the county&rsquo;s highway network and championed shared services.&nbsp; He was the driving force behind the establishment of the Wayne County Industrial Development Agency, the Wayne County Planning Department, the Wayne Area Transportation System, the Wayne County Water Authority and the Wayne County Action Program, Inc., where he retired as Chairman of the Board of Directors in December of 2013. &nbsp;&nbsp;Don stepped down as Chairman of the Board of Supervisors in 1973 when he and Lynn purchased the Robertson Funeral Home in Wolcott. &nbsp;He then assumed the role of Chairman of the Board of Supervisors Finance Committee, where for over 30 years he managed the County&rsquo;s budget with common sense and fiscal restraint.&nbsp; His financial leadership led to the construction of a new Social Services building, a new Public Health building and a state of the art County Nursing Home. Don was passionate about the Town of Savannah and worked tirelessly to improve his beloved community.&nbsp; He was responsible for over $2 million in state and federal grants for water and sewer and main street improvements.&nbsp; Don was especially proud of the Montezuma Audubon Center and the access bridge to Howland&rsquo;s Island. &nbsp;Public service was a labor of love for Don and his legacy lives on in the countless lives he touched and in the family he loved so much.</p> <p>Don is survived by his wife of 65 years, Lynn of Savannah; their son Richard (Joseph) of Maryland; son-in-law Michael Shelley of Florida; grandchildren Brandon (Danielle) Shelley and Elizabeth (Maxwell) Stewart; siblings Neil Colvin of Buffalo, Jerry Colvin of Red Creek and Phyllis Frink of Randolph.</p> <p>Don was preceded in death by his daughter, Elise, on March 31, 2011.&nbsp;</p> <p>&nbsp;</p> <p><br /><br /><br /></p>
To send flowers to the family or plant a tree in memory of Donald Colvin, please visit Tribute Store

A Memorial Tree was planted for Donald
We are deeply sorry for your loss ~ the staff at Norton Funeral Homes
Join in honoring their life - plant a memorial tree
Services for Donald Colvin
There are no events scheduled. You can still show your support by sending flowers directly to the family, or planting a memorial tree in memory of Donald Colvin.
Visit the Tribute Store